The community is amped up as ever for the month of November! Tournaments of all ranks and sizes are lined up and ready for you to join: whether it be showing the world your mastery of micro-ing or amplifying your voice for your favorite contestant! As always, we have last month’s tournaments also packed, recapped, and ready for you to watch, so if you missed any of the action we have you covered! Buckle up, Age fans, and prepare yourselves for another month of esports!

Now that November is here, we’ll take a look at some of the happenings in the Age of Empires community. There are tournaments catering to all skill levels that you can get involved in—either as a player or as a viewer!

Below, you will find a list of details, sign-ups, brackets, and schedules where you can tune in to all the action; we hope you’re ready for another exciting month!

The 2v2 World Cup is coming to Age of Empires II: Definitive Edition. After its previous installment in 2018, the community has anticipated the sequel of the worldwide event! Now the World Cup is back to offer the top 32 teams in the world an exhilarating chance to represent their nation as they compete against the best there is to offer! Not to mention that teams will be battling for a shot at the impressive $30,000 prize pool, along with the opportunity to go down in Age of Empires esports history!

The action doesn’t stop there! An additional 128 teams will be participating in the Silver League: a mid-to-high-tier competitive tournament paving the way for high-level action, prizes, and sportsmanship for lower-Elo contestants.

Are you prepared for all the action to come?

Winter’s War—hosted by [wB]PoLaR, QuEnDi_True, Brisolyn, and Spooly Gaming—is a Team Deathmatch tournament presenting both 2v2 and 3v3 matches! Participants will choose civilizations from a set of three predetermined groups: ranging from the upper to lower-most tiers. This choice is extremely important and will be an important consideration, as participants cannot choose a civilization more than once throughout a series. Due to this exciting setup, players will have to invent unique strategies as they battle it out for a chance to take home a share of the $2000+ prize pool this winter!

The war begins on 09 de noviembre and plays out over the span of five weeks! Who will survive the frozen plains to be crowned winners of the greatest Team Game Deathmatch tournament that Age of Empires II: Definitive Edition has ever seen?

The structure is simple: have fun together and sharpen each other’s gameplay! 64 Age of Empires II: Definitive Edition beginners with a maximum of 1100 ELO will compete in 1v1 single-elimination brackets. The Grand Finals will be guided and casted by TheViper, though other professionals may be hopping in to co-cast, as well! If you missed the first installment, you definitely won’t want to skip the crazy action and opportunities to learn about the game in this magnificent display of sportsmanship!

The Cusu Cup is the first amateur tournament organized by Deep Waters Gaming! With an ELO cap of 1300, Deep Waters Gaming is looking to introduce themselves to the community and invite amateur players to play, compete, and have fun in a tournament setting. The most remarkable characteristic of the Cusu Cup is that each round will feature three different fixed maps for all contestants: ensuring that it remains fair and consistent for all!

Interested? Make sure you join their Discord for more details!

Huehuecoyotl22—in cooperation with Nova—presents the Double Cup! An interesting twist to traditional 1v1 tournaments, Double Cup plays on maps with double or triple Town Center starts. These pools will feature classic fan-favorites like Double Arabia and ES@Metropolis, while also showcasing brand-new battlefields created by the RMS scripter scene. To top it off, the community has banded together to donate $300 for prize funds—making the tournament all the sweeter!

Standard skills and strategies will be tested by these unique maps, creating an extremely challenging and aggressive tournament scene! Make sure you tune in to cheer on your favorite participants, which includes appearances by ACCM, BacT, Capoch, Daniel, JorDan_23, and Vinchester!

Who will win? The battle is on to find out!

¡Age of Mythology: Deathmatch League Season 1—brought to you by Phenomenon and Nakamura—consists of six open tournaments. Each tournament has a group stage leading into the main bracket, and is played on a DM-specific balance mod. In addition to the individual $50 tournament prizes, players earn points for advancing through the rounds; then, at the end of the season, the top 3 will be awarded an additional $120 prize pool.

Players gain points for each round win in the series:

The sixth and final tournament will be the season finale! Only the eight highest-ranked participants will move forward, where each round will count for double points. Be sure to join the Age of Mythology DM Discord to be notified about the upcoming tournaments!

Eagle Warrior Cup is proud to make its debut in the Age of Empires scene! After the huge success of the Eagle Scout Cup—a two-player co-op tournament won by Saibot and Peterritus—this tournament follows the footsteps of grandeur. Open for up to 64 players who have a rating below 1550 ELO, participants will compete for a prize pool starting at $150! The battle has already begun, so make sure to join the group Discord for more details and live games! 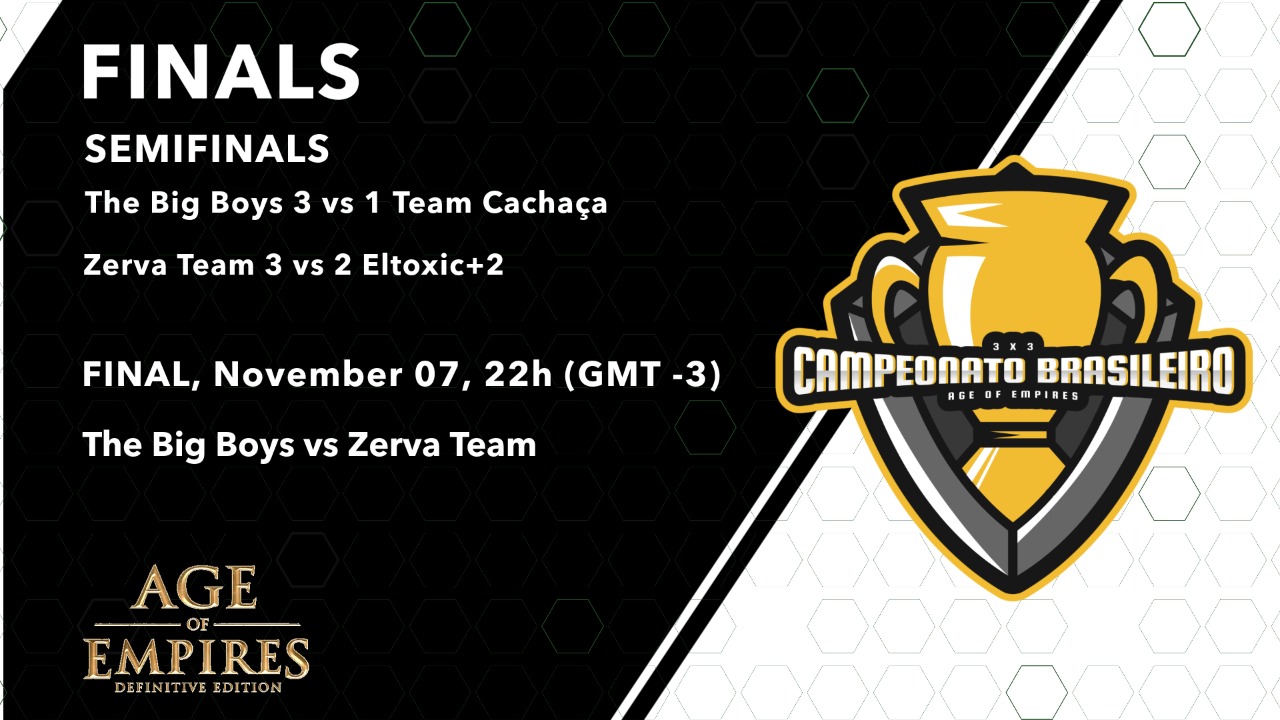 CBAoE 3v3 is a Brazilian tournament which aims to promote the Age of Empires: Definitive Edition community! The excitement around this event is palpable, as it has already received more than 500 BRL in supporting donations.

Beginning in October, 36 players have joined together to form 12 talented teams battling it out for the honor and glory of the CBAoE 3v3 crown! The Grand Finals are just around the corner, so be prepared for an outstanding display of definitive proportions!

With hundreds of players from over 30 different nations, there is a home for just about any Age of Empires fan! The competitors range from the old-school, master players to the rising stars and so many more; regardless of your skill: if you love this game and enjoy 3v3, this is your league!

The battle has just begun, so drop into the Mundo Discord for notifications when the action is live!

Knights of the Empire 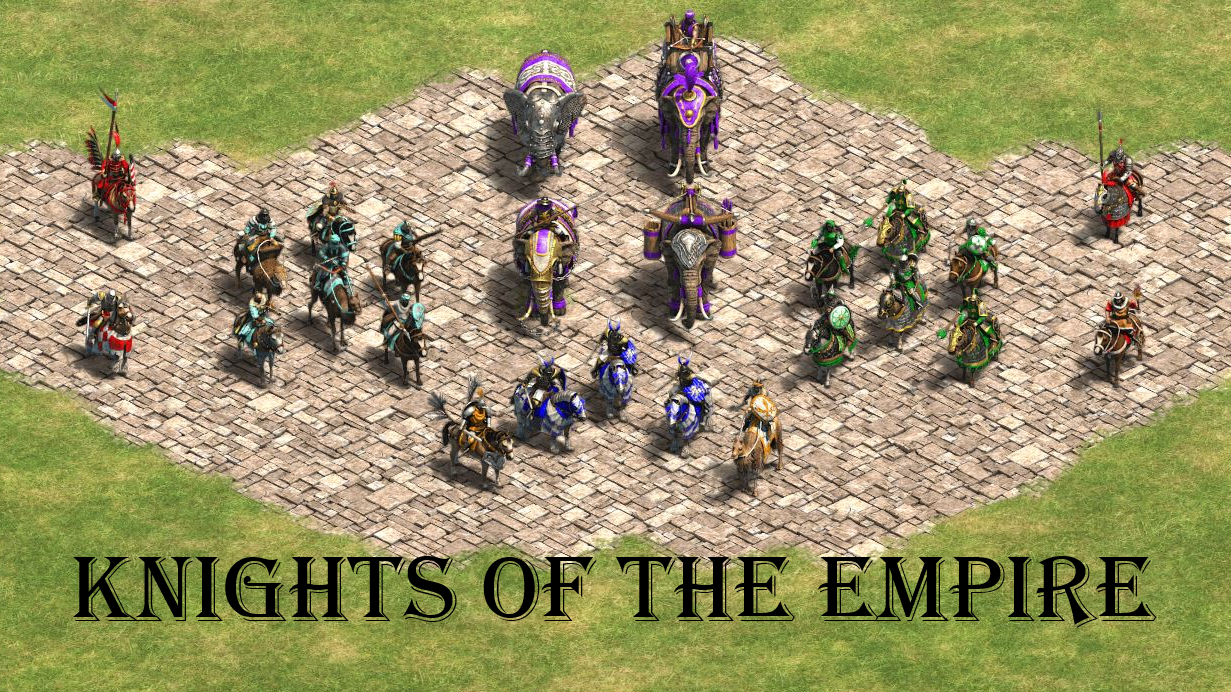 Hear ye, Knights of the Empire! The first testament of jousting is behind us as we move into the Round of 32. Fear not, though: registration may be over, but there is much more to do!

If you’re craving mid-ELO tournament action, make sure to tune into the array of streamers broadcasting as the event unfolds. With thanks to the generous contribution from pundrella on Discord, contestants will now be battling with more ferocity than ever over the $400 prize pool!

To whom shall the spoils of victory go? Find out by joining in and cheering on the Knights of the Empire!

October was a great month for Age of Empires! We’ve seen some amazing tournaments reach their conclusion with thrilling finals that you can revisit here!

As October ends, so ends the third installment of King of the Desert. For the first time in Age of Empires II: Definitive Edition, the Arabia-only tournament saw 6 weeks of intense action and an extremely high level of competition!

Organized by MembTV and sponsored by Pinztec and Microsoft, KotD3 featured a fantastic $50,000 USD prize pool—enough to attract the top 64 players in the world!

KotD3 was played on a custom Arabia map created by the tournament admin Chrazini. While staying true to the original map’s style, it features several characteristic tweaks that make it more suitable for tournament play. Most notably: the elephants/rhinos spawn were specifically designed to make boar stealing much harder—balancing it to be a high-risk/high-reward strategy.

The incredibly surprising and thrilling matches of this tournament kept everyone on the edge of their seats! If you have yet to catch the conclusion of the event, we highly recommend watching the match replays.

Surprisingly, several high-seeded players such as Laaaan, ACCM, and Capoch did not make the group stage, while Japanese player Chart—seeded 46—made it into the top 12! Even Villese surprised the crowd as he climbed his way into his first-ever major tournament semifinal. And the surprises didn’t end there; two-time champion TheViper was unable to defend his title after a 0-3 defeat to Mr_Yo in the quarterfinals.

As a two-time runner-up in the previous KotD events, Liereyy would finally secure his victory to became a King of the Desert after defeating MbL40C 6-3 in the Grand Final.

Well played by all who fought tooth-and-nail to climb so far, and a very special congratulations to Liereyy for taking the victory!

Battle Royale arrives in Age of Empires II: Definitive Edition later this month, but we’re celebrating early with an action-packed preview event showcasing just how crazy-fun this new game mode can be! Sixteen expert players and streamers entered the free-for-all arena where the walls constantly close in on their armies—forcing them into a fight for the safe spots on the map.

Congratulations to T90Official, who, in a remarkably consistent run, never placed lower than 4th in any game that he played! He was followed by the runners-up: TaToH, Nicov, and Nacho_AoE.

The 2020 AOElympics—hosted by Huehueyocotl22—finally came to its conclusion on 05 de octubre, and what a journey it has been!

The open, nation-based tournament—in the spirit of the Olympic Games—had 63 events on various maps that were open to one representative per nation. This included 1v1, 2v2, and 4v4 brackets, and featured some of the most popular Age of Empires II: Definitive Edition maps of the last few decades. In each bracket, teams could win a gold, silver, or bronze medal for their nation, which were combined in a final tally to determine the winners of the $7,000 USD prize pool (sponsored by PinzTec and an anonymous community member).

575 players signed up, representing 43 total nations. Of those represented, more than half took home at least one medal!

Brazil emerged victorious with a grand total of 12 gold, 7 silver and 3 bronze medals, followed by Norway (9 gold) and Vietnam (8 gold).

Participation was entirely up to the teams: with some nations competing only in 1v1 matches and others in 4v4 games. Because of this arrangement, it was possible for one representative of a nation to potentially win up to four gold medals, as every player could play in four 1v1, three 2v2, and four 4v4 brackets.

Congratulations again to the winners and to everyone who participated!

The Town Bell Cup 3—hosted by WeCompete—was the third installment of this two-day, 1v1 Best of One Arabia tournament.

Featuring a Group Stage followed by Silver and Gold single-elimination brackets, this open Elo tournament aimed to provide a fun and competitive environment for players of all levels.

The tournament had 104 participants fighting for a combined prize pool of $110. On top of that, the games were covered brilliantly thanks to the combined efforts of aoeparatodes, blair94, cbassjr713, grathwrang, p0ni_b0i, tomsnuffles, and zerozabias.

After an incredible Quarter Finals game where Survivalist surprised everyone by winning over Capoch, the semi-finals were played by ACCM, _hallis, Survivalist,and saymyname.

In the end, ACCM beat his fellow countrymen saymyname in a 2-1 victory, and was crowned champion of the Town Bell Cup for a second time! Congratulations!